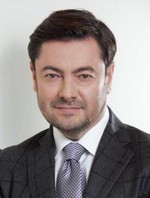 Secretary General of the Verkhovna Rada of Ukraine

Mr. Viacheslav Shtuchnyi is the Secretary General of the Verkhovna Rada of Ukraine since November 2021 (took the post again, the first time he held the post from September 2019 until July 2020).

Since January 2018, he has been a adviser to the Minister of Foreign Affairs of Ukraine and since February, 2018 - a Docent at the Chair on Public Management and Administration of the National Academy of Internal Affairs. From May to September, 2019 and from July, 2020 till October, 2021 held the position of the First Deputy Head of the State Protection Directorate of Ukraine. From February, 2017 to February, 2018 Mr. Stuchnyi worked as a leading researcher at the Interdepartmental Research Center on Combating Organized Crime at the National Security and Defense Council of Ukraine. From October, 2015 till May, 2019 he was engaged in business activities. In 2013-2015 Mr. Stuchnyi studied at the Diplomatic Academy of Ukraine under the Ministry of Foreign Affairs, majoring in Foreign Policy. In 2003-2015 he was in the military service at the State Protection Directorate of Ukraine holding senior staff positions, in 1993-2003 he served in bodies of internal affairs of Ukraine, simultaneously from 1993 to 1997 studying at the National Academy of Internal Affairs of Ukraine in the specialty "jurisprudence".

Mr. Stuchnyi holds a Ph.D in Law and the title of a  Honorary Lawyer of Ukraine.